Bringing together leadership and operational expertise from Essendant and S.P. Richards and combining the best elements of each business' operations will create an even stronger company with the ability to harness each organization's unique strengths and capitalize on opportunities to create value, including:

Ric Phillips, Essendant President and Chief Executive Officer, who will lead the combined company, said, "By bringing together two businesses with long histories, complementary product lines and a shared customer-centric approach, we are creating a much stronger, better positioned company. Combining resources, leadership and operational expertise from both teams, and the unique strengths of both businesses will enhance our ability to compete and help our customers succeed in the face of a rapidly evolving market. In addition, through increased scale, improved service capabilities and an enhanced financial profile – including significant cost savings, increased free cash flow and a stronger balance sheet – we will be able to drive more profitable growth and create meaningful value for shareholders."

Paul Donahue, Genuine Parts Company President and Chief Executive Officer, added, "This transaction is the result of a comprehensive process to maximize the value of S.P. Richards and represents a key step in the execution of Genuine Parts Company's long-term strategy by enabling us to increase our focus on our larger, core global automotive and industrial businesses. In addition, the merger provides substantial upside to Genuine Parts Company shareholders through the significant value proposition of the combined company that will be better equipped to succeed in a dynamic and changing marketplace. We have tremendous respect for Essendant and believe the combination with S.P. Richards' strong, diversified business and talented team will bring together two highly complementary cultures with a shared commitment to serving customers. For employees, the new company will have the scale and depth to compete more effectively, and we look forward to supporting the S.P. Richards and Essendant teams in facilitating a seamless integration."

Value Creation for Both Companies' Shareholders

The transaction creates a company with pro forma 2017 net sales of approximately $7 billion, $300 million in Adjusted EBITDA, 4.2% Adjusted EBITDA margins.1 The combined company will have a stronger and more flexible balance sheet, which will enable it to reduce leverage, invest in the business and provide value to shareholders.

In addition to creating a platform with greater scale and the enhanced ability to serve customers, the combination is expected to unlock more than $75 million in annual run-rate cost synergies and more than $100 million in working capital improvements. The cost synergies will primarily be driven by sourcing, supply chain and selling, general and administrative efficiencies. The combined company expects 90% of the cost synergies to be realized within two years post-closing and to incur less than $50 million in one-time cash costs to realize the synergies.

The transaction is expected to close before the end of 2018, subject to regulatory and Essendant shareholder approvals and other customary closing conditions.

Upon close of the transaction, the combined company, which will be called Essendant, will be led by Essendant President and CEO Ric Phillips, and Janet Zelenka will serve as CFO. S.P. Richards President and CEO Rick Toppin will be appointed Chief Operating Officer of the combined company. Additional leadership roles will be mutually determined as part of the integration process.

The combined company will maintain headquarters in both Deerfield, IL and Atlanta, GA.

Participants in the Solicitation

No Offer or Solicitation

This press release shall not constitute an offer to sell or the solicitation of an offer to buy any securities, nor shall there be any sale of securities in any jurisdiction in which such offer, solicitation or sale would be unlawful prior to registration or qualification under the securities laws of any such jurisdiction. No offering of securities shall be made except by means of a prospectus meeting the requirements of Section 10 of the U.S. Securities Act of 1933, as amended.

Essendant Inc. is a leading national distributor of workplace items, with 2017 net sales of $5.0 billion. The company provides access to a broad assortment of over 170,000 items, including janitorial and breakroom supplies, technology products, traditional office products, industrial supplies, cut sheet paper products, automotive products and office furniture. Essendant serves a diverse group of customers, including independent resellers, national resellers and e-commerce businesses. The Company's network of distribution centers enables the Company to ship most products overnight to more than ninety percent of the U.S.

Genuine Parts Company is a global distributor of automotive replacement parts in the U.S., Canada, Mexico, Australasia, France, the UK, Germany and Poland. The Company also distributes industrial replacement parts and electrical and electronic components in the U.S., Canada and Mexico through its Industrial Parts Group.  S. P. Richards Company, the Business Products Group, distributes a variety of business products in the U.S. and in Canada.  Genuine Parts Company had 2017 revenues of $16.3 billion.

S.P. Richards, the Business Products Group of Genuine Parts Company, is a leading business products distributor throughout the U.S. and Canada, with 2017 revenues of approximately $2.0 billion. S.P. Richards equips reseller customers with an expansive offering of general business products, including everyday essentials like copy paper, office and printer supplies, as well as office furniture, business technology products and facilities, breakroom and safety supplies. S.P. Richards distributes more than 98,000 items to over 9,700 resellers and distributors from a network of 54 distribution centers. 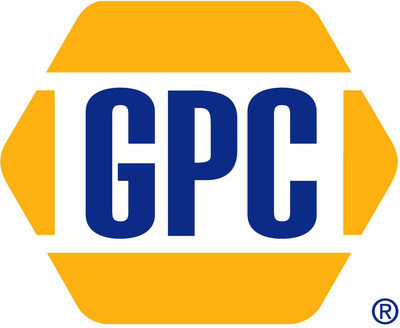